Was the Dress Blue or Gold?…Rant 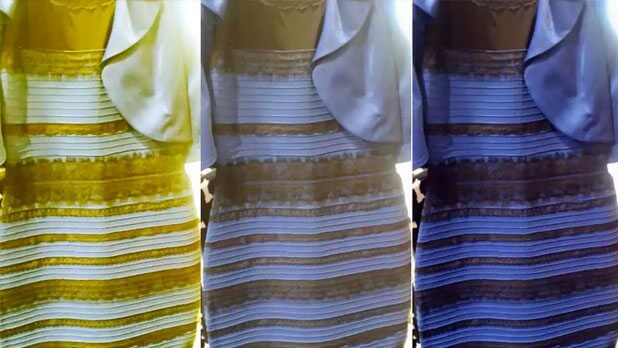 A few months ago there was a viral image called “Dressgate.” It was a picture of a dress.

“What color do you think the dress is?”

“Experts” chipped in with their scientific analysis on why people were seeing different colors.

The drivel about whether the dress was gold or blue proved that the brain can ultimately be your worst enemy – It fools you into seeing only what you want to see.

This is called “confirmation bias.”

It’s like when a five-year-old covers up his eyes and yells, “Nah nah! I can’t see you!” to his mother who’s sitting right in front of him.

Pilots have adhered to confirmation bias, too. When weather didn’t cooperate, they refused to accept it. “I can make it,” were the last words of pilots who only saw what they wanted to see.

During the “Dressgate” scandal, confirmation bias took over…and people saw only what their brain WANTED to see or was conditioned to see. Some saw a gold and white dress…others saw a blue and black dress.

The real science showed that the image was not clear enough to offer all the information the brain needed to process the real colors. Therefore, subconsciously, the brain chose what it was trained to choose.

Writing on the ambiguity of the dress, an article in the NY Times stated that when people only have “obscure bits of information” (OBOI), their brain fills in the gaps and sees what it wants to see based on how it is conditioned.

This phenomenon has been tested and verified in many other fields.

Ever notice how Big Pharma and Western Medicine use this against you?

They intentionally create OBOI (“obscure bits of information”) to fool the American public and create a confirmation bias.

In other words, they train and condition your brain to think that meds are good for you.

Like using only a few pixels on a computer screen, Big Pharma uses a few sound bites, an expert here and there…then adds in a paid celebrity to endorse a product they have not the slightest clue about.

Bam. The result is a hypnotic message such as, “I need to lower my cholesterol” buried into your subconscious.

“Have you checked your bad cholesterol?”

“Bad cholesterol is now shown to cause heart disease.”

“And in other news, UCLA is leading the way in designing new ways to test bad cholesterol levels.”

Like Nazi mind control, this shit gets repeated thousands of times per day on the news and in commercials, slowly gaining power over people’s emotions and minds.

Unless you’re aware of this stuff, you’re probably not in control of your life.

These useless, random bits of info have successfully trained Americans to believe cholesterol is bad. Many will defend their conditioned bias all the way to the grave.

Before you know it, you’re taking Lipitor, a cholesterol-lowering drug.

Never mind that SCIENCE shows the higher your cholesterol, the longer you live.

But no one seems to give a shit. They’re too busy consuming OBOI.

Nobody even knows what the f#$ck cholesterol is, or what it does, or why it fluctuates.

Yet, by pumping out obscure bits of information, Pharma tricks your brain into thinking:

“Cholesterol must be bad; I must be on drugs!”

The little bits of data elicit a false high in your brain, appealing to the cozy and comfortable confirmation bias that makes you think all is good in the world when you’re taking cholesterol drugs.

Never mind that science shows the majority of heart attack victims have LOW cholesterol, not HIGH.

(By the way, that was on the cover of TIME Magazine. But like a pilot who refuses to see the developing storms ahead, the confirmation bias of the masses didn’t allow this refreshing moment of logic to deter their bias.)

…and people act surprised when early funerals take place for their loved ones who were faithfully on their meds.

I don’t believe in hypnotizing people or sending them to the grave.

I believe in giving people the FACTS, whether they like them or not. Whether they approve of my delivery or not.

Most people look at me — a guy with tattoos, torn jeans, grappler, cuss words, pilot — and they assume I couldn’t possibly trump an army of marketers disguised as medicine experts.

Newsflash: I obtained a masters degree in chemistry to work in a lab, not be your friend, your guru or medical doctor…The People’s Chemist isn’t trying to convince you of anything. I don’t give a sh#t if you choose to make poor decisions for your health. I don’t need your approval, nor do I care if you take me seriously or not.

But if you’re looking for true HEALTH, then you need to pay attention to what I’m saying.

When it comes to science, it only takes one person to verify an apple falling from a tree. (AKA gravity.)

Translation: It only takes one person to verify reproducible results.

That, in a nutshell, is science.

Science doesn’t require a democracy, a popularity contest, or a staff meeting where everyone’s on board. Nor do I.

Want to free yourself from Obscure Bits of Information?  Want take charge of your health and live a healthier and more active lifestyle?  Then start by reading Over-The-Counter Natural Cures Expanded.

Heart Surgeon: “They Tried to Silence Me After Prescribing These Natural Cures”