Subway Lied to You! And So Did…. 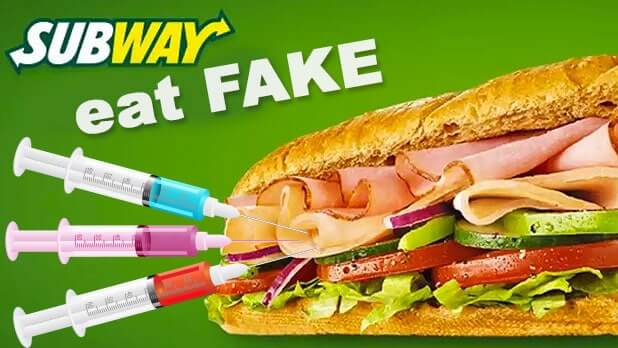 “Wahoo!!! Victory!!! The fast food world is getting better!!”

The only problem is…Subway has been LYING to people for years, and no one seems to care.

Their motto was “Eat Fresh!”

For years Subway profited big time by convincing people they were “eating fresh.” Customers were using their faces to attack seemingly “natural” sandwiches around the clock. Breakfast, lunch and dinner were prime time for choking down fresh, artificial crap.

…I don’t buy the hoopla. I have a brain. I use it. There, I’ve come out of the intellectual closet.

If Subway was a person, they’d be the abusive boyfriend who promises to change. But instead, just comes up with more manipulative ways to control you.

Partners in crime, Taco Bell and Pizza Hut are cut from the same cloth. Both announced that they would be using “natural alternatives” like real black pepper instead of synthetic ingredients.

I don’t know what’s worse…Corporate criminals or the morons who allow this shit.

Fact: Fast food is merely jumping on the “no artificial ingredients” bandwagon because that’s what consumers want to hear — not because it’s the right thing to do. It’s all smoke and mirrors.

Besides, there are so many other things wrong with fast food that pulling anything out isn’t going to help it…

“We’re really proud of all the work we’ve done,” said Elizabeth Stewart, who calls herself “director of corporate social responsibility” at Subway. “This is an ongoing thing for us.”

Stop abusing your customers. Sell them what you say you sell them.

It’s just like when Pfizer — the giant drug company that makes Centrum Multivitamins — was caught putting deceptive labels on its Centrum products.

It was only AFTER the Center for Science in the Public Interest (CSPI) threatened Pfizer with a nasty lawsuit that the drug giant did the right thing by removing the false claims from their products.

Give me a bat…

Whether it’s Subway…or some other nasty ass fast food place…or drug companies promising to make their supplements “healthier” and more “natural,” 9 times out of 10 they’re just telling you what you want to hear, not actually giving you what you really need to be healthy.

Pfizer’s Centrum brand of multivitamins generates $1 billion in sales each year, only because consumers are still falling for the scam that these products are “healthy.”

If Centrum was unhealthy to begin…then you know you’re dealing with a huckster who’s likely to never change. Adjusting the label won’t make the product any healthier.

On the other hand, my truly natural multi-vitamin, Daily Dose, has NEVER had any artificial ingredients in it. It was designed to be completely natural — not “fake natural.” There’s no Frankenstein chemicals, no artificial flavors, colors, sweeteners, or preservatives in it — NOTHING. No soy, no magnesium stearate, no titanium dioxide. No maltodextrin.

There will NEVER be anything artificial in it.

Artificial does not belong in the human body. Period.

As The People’s Chemist, I have a policy that all products I sell will bring measurable, repeatable results based on solid science — or else I won’t sell it. Simple.

All ingredients in Daily Dose have been scientifically proven to be safe and beneficial for the human body.

For example, curcumin (one of the ingredients in turmeric — found in Daily Dose) has been shown to be effective at protecting against cancer. The American Cancer Society (ACS) wrote: “Laboratory studies have shown that curcumin interferes with several important molecular pathways involved in cancer development, growth, and spread.”

When it comes to what you put in your body, you have full control. Stop letting Corporate America swindle you with whimsy PR.

Chemical Conspiracy: It’s Not The Food, It’s The Drugs In The Food!

25 Years of Exercise: 8 Tricks I’ve Learned About Nutrition, Recovery and Bouncing Back From Injury