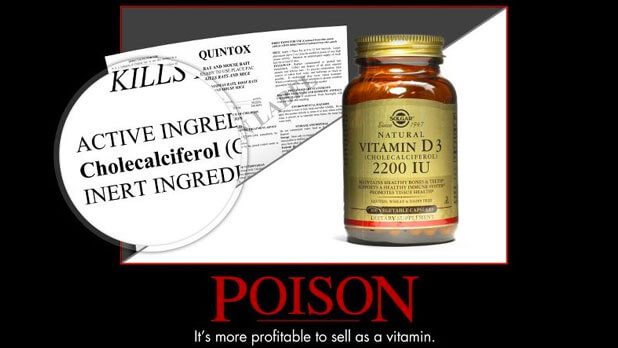 The vitamin industry cannot be taken seriously. The well-known Vitamin D Council proves this. Their ability to shove falsified science down the throats of unsuspecting consumers makes even the most scandalous drug reps envious. Anyone who can crank out this much bogus shit without being tagged as con-artists deserves an award. Hopefully, consumers will reject “D propaganda” and regain their health before it’s too late.

The Vitamin D Council states that we need to raise our levels of vitamin D. But what are optimum levels and who defines them?

You need sunshine to be healthy, not vitamin D pills

Since 1997, the National Institutes of Health (NIH) has shown that blood levels equal to or slightly greater than 15ng/ml of a substance known as 25-hydroxyvitamin D (25-D) are indicative of a healthy vitamin D level. This can easily be achieved from moderate sun exposure. You can slosh through all the studies that prove this if you want.

The Journal of Clinical Endocrinology Metabolism published the vitamin D levels of 93 healthy young adults who were regularly exposed to sunlight in Hawaii. The median 25-D level was 31.6ng/ml.

The Canadian Medical Association Journal revealed the average 25-D levels of a cross-section of healthy Calgary citizens. It was 23ng/ml.

Another study on healthy Bangladeshi women found that approximately 80% of the women had a 25-D level under 16ng/ml.

A 1992 study of healthy full-term infants from China revealed serum concentrations of 25-D ranging from an average of 5ng/ml to 14ng/ml.

According to Dr. John Cannell, founder and Executive Director of the Vitamin D Council and his colleague Dr. Michael Hollick, these levels are too low. “We have long advocated maintaining a 25-D level of greater than 60ng/ml. But even those suggested levels might be too low, we may need to revise our suggestion to say that a target level of 80ng/ml or perhaps 100ng/ml should be adopted, insisted “D spin docs.”

Are you starting to see the bigger picture?

RELATED: Finally – A Multi-Vitamin That Preserves Your Body, Rather Than Poisoning It

When you translate Cannell’s bullshit logic, it states that “optimal” vitamin D levels should be three times greater than the average level recorded in the blood of healthy, young Hawaiian sunbathers! That means sunshine will never be enough.

Their underlying message is uniquely crafted to convert healthy people into patients. This tactic comes from Drug Pushing 101. Dr. Cannell and the Council are seasoned pros at it, too.

The Vitamin D Council has every American, including new born babies, convinced that they don’t have optimal levels of “vitamin D.” And because no amount of sunshine will create those levels, you’re forced into overdosing on a shit sandwich loaded with drugs disguised as vitamin D2 and D3, which are vastly different “biochemically” than food or sunshine-derived vitamin D in your body.

Are you starting to smell the sulfur?

Telling us that we need exorbitant levels of 25-D lurking in our blood, by choking down a man-made pill is like throwing caution to the wind and arrogantly implying you’re more powerful than the sun.

Wait, I can actually relate to that. I wish I could dominate natural law even more so…

I wish I could inhale the sweet smoke of tobacco without trashing my lungs.

I wish my kids realized how imagination trumps education to exceed all teachers expectations.

I wish I could drink my body weight in tequila and wake up feeling refreshed, ready to eat a bullshit sandwich without puking.

But it’s impossible. And every now and then, a large group of scientists intervene for a reality check. Enter the Institute of Medicine (IOM).

Commissioning a full-fledged investigation by the Tufts Evidence-based Practice Center, the IOM asked experts to look at all the available vitamin D science to date and measure the validity of the vitamin D claims. After a meticulous examination, the report’s conclusion stated that, “the majority of the findings concerning vitamin D, calcium, or a combination of both nutrients on the different health outcomes were inconsistent.”

Tyrants don’t take to science easily. They always fight back. And the vitamin D council is doing so by inventing a new disease known as “Vitamin D Deficiency Syndrome,” or VDDS.

According to Dr. Cannell, VDDS exists for anyone with 25-D blood levels equal to or less than 25ng/ml who also have two or more of the following conditions: osteoporosis, heart disease, hypertension, autoimmune diseases, certain cancers, depression, chronic fatigue or chronic pain. And since sunshine won’t help you meet this artificial level, most of us are going to qualify as patients based on the faulty, 25-D blood test.

Dr. Cannell has been sniffing pharmaceutical cotton for so long, he thinks his shit don’t stink. Did you know that Cannell’s previous gig was as a psychiatrist in a hospital for the criminally insane? Now you do. Psychiatrists are master disease branders and drug pushers. It’s no surprise that once you’re diagnosed deficient by his standards, he’ll sell you his own “vitamin danger” as, “Dr. Cannell’s Advanced D.”

RELATED: Finally – A Multi-Vitamin That Preserves Your Body, Rather Than Poisoning It

Truth be told, vitamin D2 and D3 are man-made drugs, suitable for rat poison, not vitamins. And the University of Colorado reminded the scientific community of this danger when they published, “In fact, baits containing large quantities of vitamin D are used very effectively as rodenticides (rat poison).”

Popular poisons Quintox and Rampage prove this. They contain less than 8 percent vitamin D per serving and will kill a rat in 1 to 4 days, which means vitamin D wouldn’t make it past clinical trials if it were treated like the drug it is!

Nutritionists are unaware. Male cheerleader turned nutrition guru, Johnny Bowden (Whoops, I spelled his name wrong.), proves it. Vitamin D pills are his crown jewels, and he likes “bromancing the Dr. Cannell stone.” He often uses statistical contortionism to push it as a non-toxic cure-all, akin to water! He doesn’t understand that, unlike water, it’ s a “cumulative poison;” meaning that it’s absorbed by fat cells and festers internally for months. It’s called bio-accumulation. And that’s where small, daily ingestion becomes dangerous, the repeated use over time gives way to side effects – death in slow motion. Water on the other hand gets passed through readily after used, and doesn’t snuggle into the far away corners of our fat cells.

Writing for the Journal of Clinical Endocrinology Metabolism, scientists showed that vitamin D consumption, decreases parathyroid function and may depress bone turnover to some degree. Trevor Marshall, PhD, professor at Australia’s Murdoch University School of Biological Medicine and Biotechnology demonstrated that it suppresses the immune system, concluding that, “The comprehensive studies are just not showing that supplementary vitamin D makes people healthier.”

Fortunately, when produced by our skin, in response to sunshine, the intelligence of our hormonal system protects us from toxicity by rapidly breaking down the vitamin D-like compounds, which is why nobody has ever been damaged by sun-induced production. Unfortunately, the same cannot be said for oral ingestion of the franken-chemicals, D2 and D3.

Bullshit logic or nutrient logic? Pills made in a lab, or sunshine? You decide. In the meantime, may this award prove that the Vitamin D Council is nothing more than a thinly disguised veil for a Vitamin D Medicine Show – a scientific pantomime. Sunshine and select, naturally occurring, vitamin D rich foods will always optimize our levels, no matter how “low” they might be according to the ill-found standards of pill pushers.

All Natural Multivitamin That Preserves Your Body

All Natural Multivitamin That Preserves Your Body

Read This if You Currently Take a Multivitamin Purchased from the Grocery Store or Health Store...

25 Years of Exercise: 8 Tricks I’ve Learned About Nutrition, Recovery and Bouncing Back From Injury

What’s the Best Test for CORONAVIRUS?