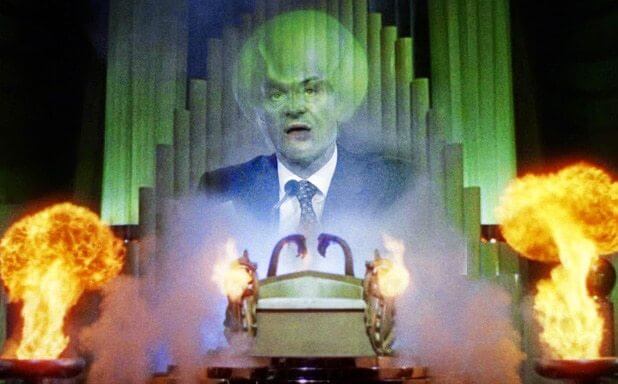 The two-time Emmy® Award-winning, critically acclaimed and nationally syndicated “The Dr. Oz Show” has begun its fourth season. What are you hoping to see?

The Wizard of Oz was a fraudulent, old man pushing buttons and pulling levers to produce the illusion of power.

…Dr. Oz is a milk toast pussy who pushes the emotional buttons of Americans to grease the pharmaceutical levers of the drug dealing machine. His consistency is unmatched. Every time the pharmaceutical industry gets a profit erection, he’s at the end of it, hence the Stinky Sulfur Award.

As a high schooler, Dr. Oz was the nerd who lacked a prominent chin, always had his shoulders slumped and went after chicks he couldn’t get. He probably liked poking people in class, bragged about being in the Thespian club and got his lunch packed by mom. Now, as a prominent surgeon, he masquerades as a health nut guru who is nothing more than an overpaid doctor from Harvard who panders to the dumbest common denominator…

The show only succeeds because it serves as a mindless diversion in a society that’s been trained to crave entertainment over substance. Instead of highlighting real breakthroughs in health like environmental medicine, natural cures for less than $10 bucks, stent placement and lifesaving surgery techniques for youths in war torn countries, the audience is sold vaccines, hormones, Metamucil and enough crappy vitamins (made by the drug industry) to choke a celebrity rehabber.

Here are four reasons I hate this piece-of-shit-show.

As a corporate con artist, Oz speaks of coming pandemics and outbreaks while urging parents to vaccinate kids. To protect his pro-vaccine stance, he uses idiotic oversimplifications like, “the benefits of vaccines outweigh the risk.” But, he doesn’t vaccinate his own children…His real interest in vaccines stems from greed. The Security and Exchange Commission reports that he owns 150,000 shares in vaccine maker Siga Technologies.

Reason #2 – Dr. Oz Contradicts Himself while Promoting Hormone Use

The TV wizard is wildly confused about The hCG Diet, a weight-loss regimen which prescribes a dangerously low number of daily calories (500) along with injections of synthetic Human Chorionic Gonadotropin (hCG).

Under the heading, “The Shortcuts Dr. Oz Would Never Take!” he writes against it, saying;

“Ultimately, it [hCG Diet] destroys your metabolism, as you are essentially starving yourself. Another negative side effect is the loss of muscle mass, so much that you will no longer be able to effectively burn calories.” – Dr. Oz

High on the stench of his own bullshit, he later promoted The hCG Diet in front of cameras. After expounding on its so-called benefits, he guided viewers to his favorite dealer by saying, “If you find someone like Dr. Emma (the HCG provider he had on his show), I think it’s worth trying.”

Apparently he doesn’t read medical journals. The British Journal of Clinical Pharmacology reported, “We conclude that there is no scientific evidence that HCG is effective in the treatment of obesity; it does not bring about weight-loss or fat-redistribution, nor does it reduce hunger or induce a feeling of well-being.”

Metamucil is junk. It’s “doctor speak” for chemical Kool-Aid. Nobody would drink this shit on their own. That’s why you need a wizard to trick you into choking it down. Dr. Oz thinks its great for you because it has a pinch of psyllium husk in it.

Metamucil is owned by the drug company Proctor and Gamble. If you want a list of “What Chemicals Not To Drink,” read the label. Carcinogens and excitotoxins are all there. Many of the additives in the chemical soup have been suspected to cause weight gain and symptoms of Alzheimer’s disease. As a paid spokesperson for Proctor and Gamble, Dr. Oz wants you to drink it.

Reason #4: He Promotes Multivitamins that Can Kill You

Dr. Oz insists that multivitamins are a good source of calcium and vitamin D.

A 2011 Women’s Health Initiative (WHI) Study published in the American Journal of Clinical Nutrition concluded that calcium, or calcium and vitamin D supplementation, increased the risk of heart attack and stroke. An evaluation of nearly 24,000 individuals who participated in one arm of the European Prospective Investigation into Cancer and Nutrition (EPIC) study found that individuals who took calcium supplements regularly were 86 percent more likely to experience a heart attack than study participants who did not take any supplements at all.

The Illusion of Health is Deadly

Apparently, the intellectual and philosophical ideas required to highlight real discoveries in health require too much work to be absorbed by the average moron. Therefore, The Dr. Oz Show is nothing more than a tool for rich, elitist assholes to sell people more shit they don’t need.

Healthcare is a money vacuum…It’s estimated that by the year 2017, 1 out of every 5 dollars will be stolen from the economy under the guise of “healthcare.” By not confronting the many causes of our declining health, the Dr. Oz show and its illusion of health is making sure this prediction comes true.

Medicinal Chemist: Why We Didn’t Vaccinate Our 4 Children