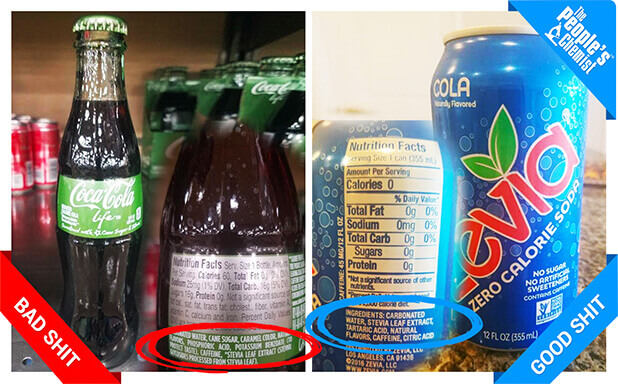 Shit is backwards. The worst offenders of public crimes are often those who are in the highest positions.  It should be just the opposite.

Therefore, it’s only fitting that they’re awarded for it, hence my latest Stinky Sulfur Award.

Coke is the latest recipient. They’re notorious for bullying their way straight to the top. For a guy who loves to bully bullies, it’s a huge honor for me to bestow this award on them. Their consistence in scamming the public, as you’ll see in the short history lesson, is unmatched.

Despite the anti-bullying campaigns on campuses around the country, the biggest bully continues its devastation unnoticed. Coke still lurks in almost every backpack and every lunchroom across America.

It’s only going to get better for Coke, too. Worse for your kids.

In 2006, The Journal of the American Medical Association (JAMA) published the results of a study on sugary soft drinks. They found that as consumption went up, the average weight of 2 to 5 year old’s shot up two-fold, since 1975.

To translate, that means weight doubled among our toddlers, thanks to Coke. Another study showed that this weight increase would steal 11-20 years from the lifespan of those kids born in the year 2000 (currently 16-17 year olds) – the largest reduction in longevity ever recorded.

To better position themselves outside of the junk food stereotype, Coke now controls dietary guidelines and even government policy to ensure their success – even if it means selling total shit disguised as a healthy indulgence to kids.

As of July 2017, Coke funds the exact same organizations that were built to protect us from their predatory advertising and slick sales. Coca-Cola’s in house physician Dr. Brenda Fitzgerald was appointed as the new chief of the Centers for Disease Control and Prevention (CDC), which monitors the impact of sugary products and artificial sweeteners on human health.

The news was celebrated on Twitter by Coca-Cola’s former chief health and science officer, Rhona Applebaum, who apparently tweeted, “An excellent choice!” She’s the same “doctor” who helped orchestrate the establishment of a nonprofit group known as the Global Energy Balance Network. The members included university scientists who encouraged the public to focus on exercise and worry less about how calories from beverages contribute to obesity.

Coca-Cola doled out $1.5 million in 2016 to support the group, including a $1 million grant to the University of Colorado School of Medicine. No coincidence, this is the same school where the nonprofit group’s president, James O. Hill, was a prominent obesity researcher and professor.

Wisely, the University of Colorado returned the $1 million gift “after it was revealed that the money had been used to establish an advocacy group that played down the link between soft drinks and obesity,” reported the New York Times in 2015. And Hill eventually stepped down from his role.

But still, with Coke’s lead doctor in charge at the CDC, the stage is now set for Coca-Cola to roll out ‘Coke Life’ under the guise of being healthy…and to make sure that sugary sodas aren’t to blame for obesity, diabetes, heart disease, cancer and early death, in that order.

Fuck.  These people are pestilent to the highest degree.  They turn up everywhere and multiply like cancer cells.  Nothing can stop them.

When people purporting to be scientists become hired guns with a hidden agenda, the undiscerning public is never aghast…they continue to drink the fucking kool-aid with the excuse that “everyone is doing it.”  Coke, Oil, Big Pharma and Tobacco are intent on leveraging this idiocy for profit by not only creating unhealthy people, but supremely stupid ones too.

The only difference is that it’s been branded with green, lush overtones to impart a fresh and natural feel. But what you really get is an unhealthy dose of bullshit, sugar, and a dash of stevia – a natural sweetener known for being healthier than sugar.

Coca-Cola was originally intended to be a drug.

In 1886 Dr. John Pemberton, a failed pharmacist, ventured into the beverage market. He created a sticky sweet, flavored syrup, pitched it to pharmacies as a medication, and was told it tasted “excellent.”

From there, Coke was born.

After Pemberton died in August 1888, Asa Griggs Candler took over the business and became the sole owner of Coca-Cola in 1891. Candler was responsible for creating the aura of secrecy surrounding Coke’s formula.

In its early days, Candler sold “Coca-Cola syrup as a patent medicine, claiming it would get rid of fatigue and headaches.” The syrup was advertised as a “nerve tonic” design to calm people’s nerves.

According to Mark Pendergrast, author of For God, Country & Coca-Cola, the original formula had a small amount of cocaine in it. Coca-Cola continues to deny this, to this day. Yet they have monopolized the import of coca leaf from Peru, thereby successfully blocking anyone in the US from using coca-leafs for tea or otherwise – they own the government, the post offices, and the farmers in Peru!

So from the beginning, this product was all fucked up.

Looking all the way back to 1898, the US Congress passed a new tax on all medicines. Coca-Cola trudged through a long court battle that allowed them to sell the product as a “beverage” instead of the drug that it really was, so that they could skirt taxes on “meds…”

It was rebranded as a “refreshing” soft drink. (That’s as ridiculous as rebranding NyQuil as Sleepy Time Tea..)

Nobody ever stopped to ask, “What the hell is this doing to our body?”

Since its inception, Coca-Cola has grown from selling nine servings a day on its first day of business — to selling 1.9 billion servings globally today. That constitutes a mass poisoning.

In recent years, Coca-Cola has jumped on the “natural” band wagon, in hopes of tapping into people’s increased desire for healthier products. They attempted to create a “healthy” version of its drink — called Coke Life. Sporting a ridiculous green bottle (supposedly mimicking health), Coke Life is not much different than original counterpart.

Ingredients of Coke Life include:

You don’t need to be a chemist to know this is a chemical shit storm, ripe with cancer-causing assassins. And regardless of having stevia in it, it’s still loaded with cane sugar. All sugar is poison…whether it comes in a pretty green bottle or not.

Jerry McLaughlin, PhD, a chemist and professor from Purdue University, spent 28 years researching the relationship between sugar and cancer. His work showed that when cancer is DENIED of its primary fuel source (sugar), cancer cells self-destruct harmlessly.

McLaughlin’s life work — similar to that of Nobel laureate Otto Warburg, MD, PhD, in 1924 — is based on cancer’s “sweet tooth.” Over the years, McLaughlin has shown that cancer has SEVEN TIMES the requirement for sugar, compared to healthy cells.

You can bet your ass cancer cells love Coke Life!

For those who genuinely love the flavor of cola, but don’t want to butcher their health — there’s a better option.

They’re killing it in the beverage market (without killing people’s health!). They’re a company that’s had the right priorities from the beginning.

Zevia offers a range of tasty flavors to choose from, including cola and cherry cola. Mountain Zevia is my personal favorite (tastes better than Mountain Dew, with zero sugar.) They also have cream soda and root beer.

Flavored with stevia — a safe, natural sweetener — Zevia is the perfect alternative to toxic sodas that destroy your health. Every bottle has zero calories, no sugar, and no GMOs!

All of these ingredients are infinitely healthier than the sludge known as Coke Life. (Zevia recently phased out the sweetener, Erythritol, which was a good idea.)

Years ago I personally interviewed Paddy Spence, CEO of Zevia, and he’s got a good head on his shoulders! His entire crew is intelligent, honest and humble. And it shows in their products.

Check out Zevia at your nearest grocery store or www.zevia.com!

P.S. Coca-Cola attempted to make a healthier version of their deathly sugary soft drink — known as “Coke Life.” It was a disaster! Avoid it like the plague!

Instead, drink the sugar-free soda brand, Zevia! It has ZERO sugar, zero artificial flavors, zero chemicals, zero preservatives. It tastes better, too. (And no, I’m not getting paid a single dime to plug them!)

P.P.S. Serotonin FX is my natural sleep supplement, designed to induce deep REM sleep with zero side effects or drowsiness. Read how this product also helps to erase sugar cravings throughout the day: www.GetSerotoninFX.com

How To Cheat Your Way Into College…